CNN gets look inside Arizona recount

The Chinese county famed for its double-yolk duck eggs

Wait, does this mean the pandemic is over for vaccinated people?

Maldives was a Bollywood bolthole during India’s second wave. Now wealthy Indians are shut out

The extent of destruction from a deadly Metro train crash in Mexico that left at least 23 people dead, including minors, was caught on camera by a drone. Read Full Article at RT.com

The extent of destruction from a deadly Metro train crash in Mexico that left at least 23 people dead, including minors, was caught on camera by a drone.

Emergency vehicles are seen gathered at the site while first responders congregate around the collapsed platform.

At least 23 people – including children – died and a further 79 were injured after the overpass platform carrying the train collapsed over a busy road on Monday evening.

Mexico City Mayor Claudia Sheinbaum announced on Tuesday morning that an official investigation and structural review of the train line was underway.

In a statement, Mexican Foreign Secretary Marcelo Ebrard called the crash a “terrible tragedy” and offered his “solidarity with the victims and their families.”

“Of course, causes must be investigated and responsibilities defined.” 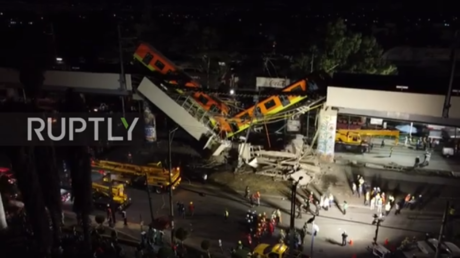