Cat jumps from fifth floor of burning building, bounces and strolls away

Solar panels are key to Biden’s energy plan. But the global supply chain may rely on forced labor from China

America’s mask mandate is gone — for the fully vaccinated

Let’s talk about the crown

A teenager has attacked a nursery school in the Brazilian state of Santa Catarina, killing three children, a teacher and an educational aide before injuring himself and being arrested at the scene, police have told local media. Read Full Article at RT.com

A teenager has attacked a nursery school in the Brazilian state of Santa Catarina, killing three children, a teacher and an educational aide before injuring himself and being arrested at the scene, police have told local media.

Emergency services received calls for help from the kindergarten in Saudades, attended by young children aged between six months and two years, at around 10:35am local time on Tuesday.

According to local reports, the callers said that a young man who had made his way into the building was attacking those inside with a machete. The perpetrator managed to stab several people before being apprehended.

All of the victims were in the same classroom, while other teachers managed to lock themselves and the children in their care in other rooms. There were some 30 kids in the building at the time of the attack, according to police spokesman Jeronimo Marçal Ferreira.

Two of the children reportedly died at the scene, while a third was rushed to hospital, where they succumbed to their wounds. The names and the ages of victims haven’t been disclosed.

Before police arrived at the scene, the attacker apparently tried to commit suicide and seriously injured himself. He has been taken to a hospital under police supervision.

The motives for the atrocity are currently unknown. The attacker was described as an 18-year-old male, who arrived at the nursing school on a bicycle. The police said that he had no apparent connection to the victims and no prior criminal record.

“It’s an inexplicable tragedy. We’re putting teams together to support the families. It’s something that has no explanation,” Mayor of Saudades Maciel Schneider said.

In a statement posted on Twitter, state governor Daniela Reinehr expressed her “deep sadness” over the tragedy and announced three days of mourning in memory of the victims. 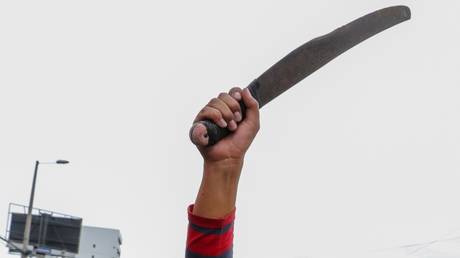