Black mother pepper-sprayed in front of her toddler, police say

Trump says he’ll campaign against Murkowski in Alaska next year

How Democrats miscalculated Manchin and later won him back

Iran has still not offered explanations for uranium material found at two of its nuclear plants last year, according to a new report by the UN’s nuclear watchdog, potentially derailing renewed efforts to revive the nuclear deal. Read Full Article at RT.com

Iran has still not offered explanations for uranium material found at two of its nuclear plants last year, according to a new report by the UN’s nuclear watchdog, potentially derailing renewed efforts to revive the nuclear deal.

The report by the International Atomic Energy Agency (IAEA) also says that Iran has produced 17.6 kg of uranium enriched to the 20 percent level – as the country had already announced – matching its target of 10 kg a month, according to Reuters.

Iran’s hardline-led parliament passed a bill in December forcing the country to “produce and store 120kg per year of uranium enriched to 20 percent” if European signatories to the 2015 nuclear deal did not provide relief from US sanctions.

On Tuesday, IAEA chief Mariano Grossi told an event hosted by the US Nuclear Threat Initiative think-tank that Tehran needed to explain why nuclear material has been found at Iranian plants in “places where they shouldn’t be.”

Grossi’s comments and the latest IAEA reports come after traces of uranium were last week reported to have been found during a surprise 2020 inspection by the UN agency at two Iranian nuclear sites.

Tehran recently temporarily agreed to continue allowing IAEA inspectors into Iranian nuclear sites for up to three months, but as of Tuesday it banned snap inspections of its plants as per the parliamentary act in December.

Furious Iranian lawmakers voted on Monday to pass a motion that condemns the country’s president, Hassan Rouhani, over the three-month agreement with the IAEA, which they see as a “clear violation” of the December legislation.

Iran’s temporary arrangement with the IAEA provides more time for the US to negotiate a return to the 2015 nuclear deal, under which Tehran limits its nuclear activities in return for sanctions relief.

Iran began breaching its commitments to the agreement after then-president Donald Trump pulled America out of the deal, known as the Joint Comprehensive Plan of Action (JCPOA), in 2018 despite monitors reporting that Iran was in compliance at that time.

Since taking office, President Joe Biden has said he is open to a return to the agreement if Iran also shows willingness to follow its conditions, which include limiting uranium enrichment to 3.67 percent.

For its part, Tehran has said it will immediately adhere to its earlier commitments once US sanctions are lifted. 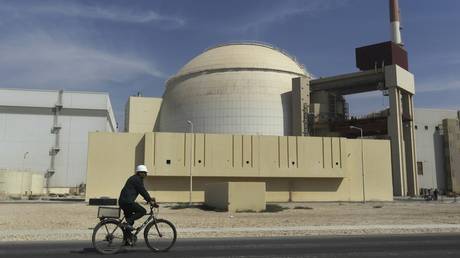